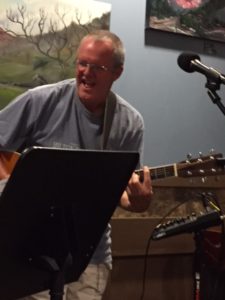 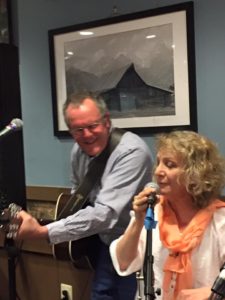 Peter Morris is a singer/guitarist who plays classic rock in various venues in Ocean County and has hosted open mics at the Acme Draft House in Bayville, and the “Spot” in Point Pleasant.

He currently hosts the AMG Showcase at Espresso Joe’s in Keyport, NJ on the first Friday of every month.

He performs with other musicians often with his wife Jeanne and occasionally their daughter Leah. They have performed at Albert Music Hall, The Lamp Post Inn, Espresso Joe’s, Elks Club, as well as other venues in the area.

Peter moved to Florida in 1979 where he became part of the Jay (Kerishenmann) and Peter (Morris) Duo, performing in local pubs till 1982. Relocated back to New Jersey 1983 and became part of The Church Street Band until it disbanded in 1986, then he briefly performed with an original band till marrying in 1987. Music became a hobby while raising a family. Joined AMG in 2013 played several venues with other members and as a solo act. His wife Jeanne Morris joined him in 2013/2014 as a vocalist and they now perform as a duo.  Peter plays acoustic guitar, electric guitar and bass guitar.