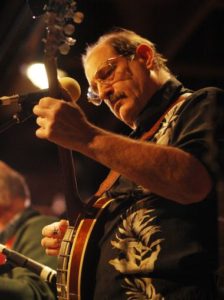 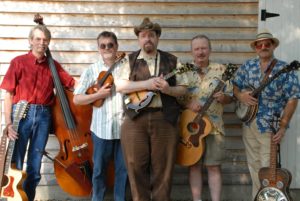 Plays Banjo, Dobro, Guitar with the

The BAD DOGZ is a bluegrass band named after Joe Wills’ schnauzer, Kayla. We didn’t know what to name the band when we first got together but when Kayla backed guitar player John O’Donnell into a chair, he remarked “That’s a bad dog!” We had a name for the group! Together since 2002, the BAD DOGZ consists of John O’Donnell on guitar, Randy Litz on mandolin, Bill Doerge on bass, Jim Gooch on fiddle,; and Joe Wills on 5 string banjo and dobro.

The BAD DOGZ have appeared for many years at the annual Spring blueberry Festival at historic Whitesbog Village,Browns Mills, NJ; and at the Fall Pinelands Discovery Day held there each October. We did our fifth performance for the prestigious Stafford Historical Society in Manahawkin last season and at the historic Tuckerton Seaport where we had the honor of being the first band to begin their First Friday Concert Series in 2008.

The DOGZ was the headliner bluegrass band performing on the main stage at the 2012 New Jersey Folk Festival at Rutgers University. We have performed at the Burlington County Farmers Market and for the last several summers at Bass River State Forest. Past appearances have been at the Acoustic Musicians Guild Harvest Harmony Festival and showcases, and at the Pinelands Charge Bluegrass Gospel Festival; and for the Ocean County Library. Other appearances include the Howell, NJ Grange, and the 1st Annual Bikes and Bluegrass in Frenchtown, NJ at the Pinelands Short Course held annually at Burlington County College.

We made a long overdue return to Albert Music Hall in Waretown, NJ and performed at both the NJ Historical Fair at Allaire State Park and at the Burlington County Earth Fair.

We opened our 2015 season at the Classic Car Show and Bluegrass Festival sponsored by the People for the Poor at Batsto Sunday, May 17th. We like to do some lonesome bluegrass and throw in some cornpone humor to keep it interesting. We’ll add in some Celtic to get your heart pumping too!

When the DOGZ are barkin’. we hope you’ll be tapping your toes and wagging your tails!

We hope to complete our CD project, “No Cats Allowed” in the near future.