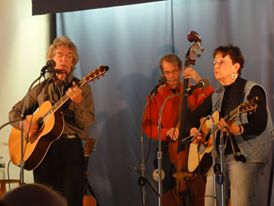 With a career that has spanned decades, from singing with a folk  trio in the 60s (The All Night Singers) on the Warner Brothers Reprise label, to teaching public school music for 40 years,  writing original material, and releasing seven cds,  Mary has made a name for herself in the Tri-state area music scene.   She has performed in various venues since 2005:  Albert Music Hall, solo and group concerts at the Ocean County Library, B.O.T.M.A., Whitesbog Blueberry Festival, Tuckerton Seaport, and various coffee houses.  She is an accomplished pianist and guitarist, and plays other instruments, including harmonica, autoharp and

flute, and is now studying violin.   She is proud to have been part the US government-sponsored 100-voice All American Chorus in 1960 (representing Pennsylvania),  which toured seven European countries, including the war-torn Czechoslovakia.   Her teaching career included “Teacher of the Year” awards in 1992 and 2000 in Toms River, New Jersey School System.

Mary now performs with the Ladies Night Out trio, treasuring sharing the music and building  friendships with Denise Miller and Gail Gilrane.  Performing since 2007, they have been complimented for their three-part vocals that Mary enjoys arranging.  Her deep love for Vermont inspired her to produce a cd of songs and piano instrumentals, released in 2009, “To Vermont with Love.”    Her discography includes “That Was Then – This is Now” 2006, “Green Mountain Dreamin” 2007, “Soundscapes of the Jersey Pinelands and Coastline” 2010, “A Haven in the Vally” 2011, and a double release in 2015, “Born in the Country,” and ” Remembrances.”

CDs available at www.cdbaby.com, and thru Mary at venues